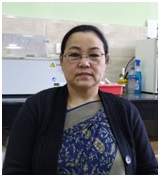 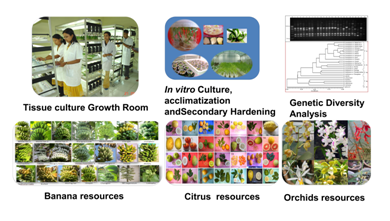 4. Research Summary
A. Current Research:
•    Huanglongbing in Manipur: Distribution, incidence, molecular characterization and its importance in the management of local citrus fruits.
Description: Presently, we are focusing on ‘Huanglongbing’ (HLB) or citrus greening in local citrus fruits of Manipur. HLB is the most severe and devastating disease of citrus worldwide, caused by ‘Candidatus Liberibacter spp. It is a phloem-limited, unculturable, graft- transmissible gram-negative bacterium vectored by the Diaphorina citri, the Asian Citrus Psyllid. It affects almost all citrus cultivars, ultimately leading to the death of the tree. In this study, we detected HLB in various commercially grown citrus varieties collected from different citrus-growing areas of Manipur. We characterized the causal bacterium and also analyze the incidence and distribution of HLB in different citrus orchards of Manipur which will help at developing a management strategy for HLB infected plants. Identification of the key genes and proteins induced by HLB in leaf tissue genes and candidate genes associated with plant defense is under process to provide information for HLB management.

•    Species delineation and evaluation of ethnomedicinally important Kaempferia L., (Zingiberaceae) species in North-east India using ideal molecular markers. In-vitro propagation of Kaempferia species: a conservation strategy
Description: An extensive survey was conducted covering all the districts of Manipur. Altogether a total of 20 samples belonging to genus Kaempferia have been collected. The collected germplasms were maintained (after giving proper accession numbers) both in the Poly-house and field gene bank of IBSD, Imphal for further investigation.  A preliminary study based on the earlier publications able to conclude that the collected Kaempferia species belong to four different species viz:  K. galanga, K. marginata, K.parviflora, and K.rotunda. During our collection, a few possible hybrids showing both qualitative and quantitative characters of K. galanga and K. marginata were found. Global Positioning System (GPS) coordinates record, addresses of the collection area, phone numbers of traditional practitioners, traditional knowledge and uses of different tribes and communities were also recorded for future references and study. Further survey and collection are planned in this season because its occurrence is restricted to certain areas. This will also aim to locate its natural habitat.

•    Conservation of rare and endangered taxa of Vandeae tribes of Manipur, NE India and production of their hybrids using Biotechnological tools.
Description: Vandeae, a large horticulturally important group of Orchidaceae family contains 1,700 - 2,000 species in more than 150 genera. The classification of taxa within this tribe is still largely based on floral morphology. With the recent spate of molecular data, evolutionary relationships among orchids are being re-established and re-circumscribed. These orchids are pantropical epiphytes and found in tropical Asia, Australia, The Pacific Islands, and Africa. A field survey was done at six districts of Manipur so far. In-vitro conservation of germplasm, determination of compatibilities of different crosses and reciprocal crosses from the collected samples will be performed.

B. Previous Notable Research:
•    Biotechnology tools for conservation of rare and endangered orchids and production of their hybrids
Description: The great popularity of hybrid orchids is due to a variety of reasons like superior quality, ease of cultivation, free blooming habit, compactness, hardiness and the incredible array of shapes, blend of colours and longer shelf-life. Orchids are slow propagative in nature. Application of tissue culture technology will be highly helpful for the rapid diffusion of new hybrids to the commercial enterprise. The aim of this project was collection and preservation of selected rare/endangered orchids for determination of compatibilities of different crosses and reciprocal crosses. Development of tissue culture protocols for axenic seed/shoot tip culture and hardening of plantlets of parent orchids and their hybrids. With advent of molecular biology, many breeders have employed DNA based molecular markers.  Development of DNA fingerprint for the species, landraces and hybrids for hybridity confirmation of orchid species was another objective of the project. Phylogenetic relationship amongst 20(twenty) taxa of the tribe Vanda (Orchidaceae) was studied  based on chloroplast trnL (UAA) intron sequence and the nucleotide sequences obtained were deposited to NCBI GenBank

•    In vitro production of disease free Khasi mandarin (Citrus reticulata Blanco) through shoot-tip grafting and molecular profiling of Citrus rootstocks of Northeast India, carried out at IBSD, Imphal
Description: Protocol for production of disease free foundation block of “Khasi” mandarin and different factors affecting the shoot tip micrografting was standardized. Two types of incision (inverted-T and wedge cut) at the decapitated portion of rootstock were studied, inverted-T cut gave better response compared to wedge cut. Research on micrografting also reveal that STG was affected by the concentration of sucrose with optimum being obtained at 6% of the four different concentration (1.5, 3, 6 and 9 %) compared. Further, the scion size influenced the rate of micrografting with 0.65-0.75 mm size giving better response in STG. Cytokinin concentration has also direct influenced in growth of the scion with better growth obtained in 1mg/l compared to 0.5mg/l BAP (benzyl amino purine).
Molecular and serological techniques for indexing of the plantlets produced by STG have been standardized. ELISA technique for detection of graft transmissible virus ctv was performed for plantlets of more than 9-10 months old obtained by STG. Since disease indexing using serological technique is influenced by various limitations, reverse transcription (RT-PCR) PCR was also being standardized using two different primers. cDNA prepared from the RNA extracted from samples and symptomatic mother plants have been used for PCR amplification using two primer pairs CTV P25F & CTV P25R and PM50 & PM 51 giving 509 bp and 697 bp in the mother plants while no amplification was observed in the micrografted plants.

•    Assessment of local banana cultivars (Musa spp.) of Manipur using biotechnological tools, carried out at IBSD, Imphal
Description: The states of north-eastern region of India are home to several wild and cultivated bananas. There is a dearth of information on the genetic diversity of Musa resources of the region to assist in crop improvement programmes. Twenty-five genotypes of Musaceae accessions including one Ensete species maintained at Institute of Bioresources and Sustainable Development (IBSD), Imphal, were characterized based on 60 morpho-taxonomic characters and seven inter-retrotransposon amplified polymorphism (IRAP) primer combinations. The morphological data were presented in the form of hierarchical clusters and principal components. Hierarchically, the Musa genotypes can be grouped into distinctive clusters, and while the first four principal components could explain 58.66 % of variation of the total morphological traits studied. A total of 337 amplicons were generated using 12 IRAP primer combinations with an average percentage polymorphism of 96.12. The molecular markers used in this study could reveal intra- and inter-group diversity among the genotypes with similarity coefficients ranging from 0.16 to 0.90. It could also differentiate the clusters of all the edible cultivated Musa genotypes from the wild/semi-wild ancestors. Thus, the chosen parameters seem to be especially important in the varietal or genotype identification.

•    Evaluation of antioxidant properties, profiling of organic acids and phenolic compounds of five wild fruits of Manipur, India and micropropagation of selected species, carried out at IBSD, Imphal
Description: Antioxidant properties, physico-chemical characteristics and proximate composition of five wild fruits viz., Garcinia pedunculata, Garcinia xanthochymus, Docynia indica, Rhus semialata and Averrhoa carambola grown in Manipur, India were presented in the current study. The order of the antioxidant activity and reducing power of the fruit samples was found as R. semialata > D. indica > G. xanthochymus > A. carambola > G. pedunculata. Good correlation coefficient (R2 > 0.99) was found among the three methods applied to determine antioxidant activity. Total phenolic content was positively correlated (R2 = 0.960) with the antioxidant activity however, total flavonoid content was not positively correlated with the antioxidant activity. Physico-chemical and proximate composition of these fruits is documented for the first time.